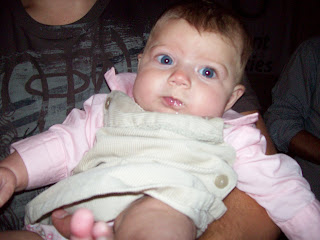 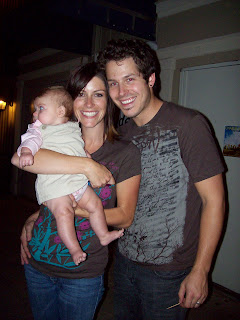 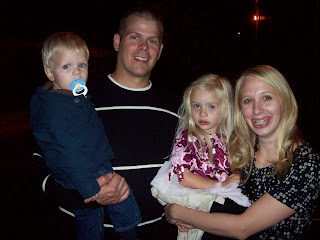 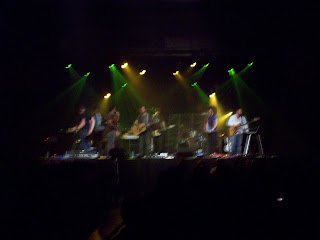 The best picture my sad little camera could get. We sat in the back row because we were the only one with kids and needed a place for them to run around. This doesn't create the best shot for good pics though!
Groupies. 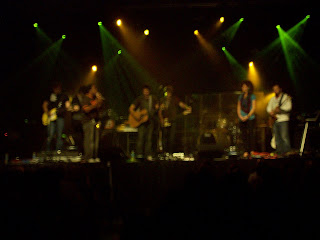 So my brother- in- law Nic opened for Charlie Hall at a concert at Liberty a couple of weeks ago, and the groupies that we are, went to see him play. He basically rocked the house and was totally awesome. According to Shane, even guys in the bathroom were talking about how good Nic was. For one night we felt pretty cool. Showing up for our "VIP" passes, okay, actually they were just little strips of paper in an envelope with our name on it, but it's the most excitement we've had for awhile! I got to hold sleeping Caroline for most of the concert until the 4 trips to the bathroom with Avery (during one song). Then we got to hang out with aforementioned rock star and family afterwards. It was a lot of fun and we can't wait for the next one in January. We're leaving Reece behind though, he wasn't that much fun. Avery however loved it. Once she found out that she wouldn't actually be up on stage dancing and singing with Nic the only thing that pacified her was that she got to wear her tutu over her outfit and dance in the aisle while her uncle praised Jesus. Pretty awesome let me tell you!

***BLOGGER is giving me major problems when I try to upload video. I'll keep trying to get video on as soon as the website is working.***

What a fun night! That is so exciting! They are such a beautiful family! Glad you were able to do something like that! How exciting!

COOL!! :) You all be looking GOOD too... Maybe I need a rock star adjustmet soon! I'll email you soon and fill you in our latest >>>

Love the pictures of the concert! New definition of "groupie" huh? Would love to have been there. Hope to be at the next one also. I also loved the kid's hats/bandana at the pumpkin patch. Did you paint or carve?? Mimi

Ha! Thanks for the coverage, rock stars need this! I am sure all media outlets will be referring to your blog one day .=) And...it was Charlie Hall, in case anyone is curious. Love you all.