I just made chicken noodle soup, banana bread, and a blueberry pie. Instead of waiting until my husband got home, I went ahead and ate. Don't judge! It was really good. Sorry Shane! Like I could resist the smell of warm blueberry pie. Oh my word, it was tasty. I only ate one piece. At least up until this exact moment that I am typing this have I eaten one piece. The next 6 hours or more until you come home? I can't be held responsible for anything after this post.
Posted by Megan at 12:38 PM 1 comment: 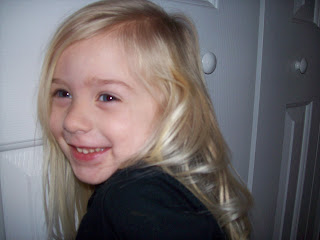 Avery was playing it up yesterday. She was so excited about sparkley "bracelets" and sparkle shoes. I was trying to get her to blow me a kiss and this is what I got. 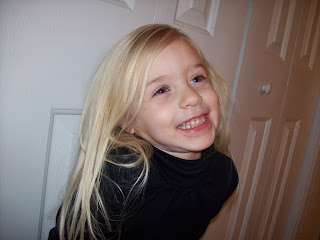 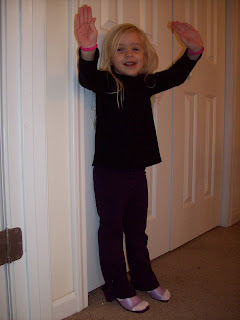 I've been making these prints for a few years and finally decided to quit giving them away and start selling them. We'll see. Shane is hoping to retire in a year. I am hoping to even sell one. HA! 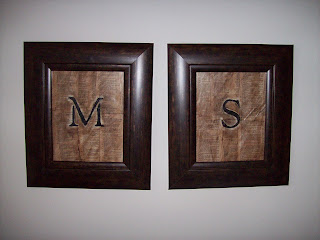 Who reads a bible commentary in the bathroom? Apparently Shane does. No magazines for this guy, isn't he so smart? I just cracked up at this and smiled thinking about intelligent he is!
Posted by Megan at 9:59 AM 4 comments:

NOT ME! Monday is a place for moms to be brutally honest and NOT admit to all the things they are doing. Go here for rules and to read more NOT ME! Mondays.

I am NOT sitting here blogging while both of my kids are whining because they are legitimately hungry. And I did NOT just take one cup from the hand of Reece and put it in Avery's hand because I was too lazy to go downstairs and get a second cup.

I absolutely did NOT just drink a huge glass of COKE, knowing that I will be up half the night, in order to have some energy to go clean out the rest of Reece's room.

And I did NOT get really grouchy at the kids because I was sad about some of the things he had outgrown.

I also did NOT feed the kids fast food three times this past week because I was too tired to make them lunch.

I also did NOT keep my poor babysitter two hours longer at my house just so I could take Avery to ballet and sit and knit or read instead of chasing Reece.
Posted by Megan at 3:23 PM 1 comment:

NOT ENTITLED TO OWN A NIGHTSTAND

The past few months I've been a little benign about my bedroom. It is the most undecorated, uncoordinated room in the house. The joke between Shane and I is that I complain that we don't have nightstands and he says, "No one said we were ENTITLED to own nightstands." He's way to practical sometimes. But it's true. So after discussing possible options (none of which were to have free reign with the credit card at Haverty's by the way, shocking I know, ha!), I decided that he was right. Surely there is enough stuff in this house to make a decent looking bedroom. The dreams of my sleigh bed and matching dresser and nightstand with a cushy chair in the corner and crown molding all around are just going to have to be put on hold. We are a Dave Ramsey family now. That means pay down debt, stay on budget, and not being entitled to nightstands.
Well, I hung up a few more pictures, ordered a wedding photo off of our Kodak account and stacked some books. I also put all the clothes away, which made a huge difference! I even crawled under the bed and pulled all the junk that had been pushed under there. Reece now has a few more cars to play with, Avery has some hairbows back, and I have another box of books that need a bookcase. (A blog post about an English major with no bookshelves in the house is in the works.) After using babywipes to get all the grimy dust from under the t.v. and behind the mirror, it amazed me how much better it looked. Still pretty sparse and no nightstand, but it looked kind of cute. If I liked the really crisp minimalist look- it totally works! I moved my chair to a different corner and kicked the dogbed to the office nook and now I have a place to read my bible in the morning. I also learned that in the late afternoon it gets direct sunlight ( I definitely suffer from sun-deprivation and Florida-like weather cravings) if I sit there I can actually feel really warm and not need 8 layers of wool to keep the teeth from chattering.
I realized that just keeping it clean was a huge difference. I kind of gave up on the room and just let it get cluttered and messy because I had a really bad attitude about it. I'm still working on lowering my standards. And I know that I'm not entitled to nightstands, but someday maybe just maybe I will have a place for my Aquafina and a lamp. HA!
Posted by Megan at 5:28 PM 3 comments: 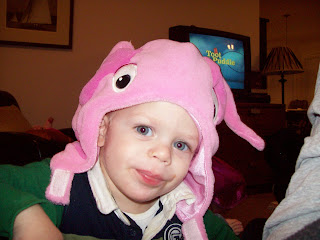 The one disadvantage to a secondborn son is that the dress-up clothes are all pink. Thankfully, Reece is pretty comfortable in his man-ness to pull this off. 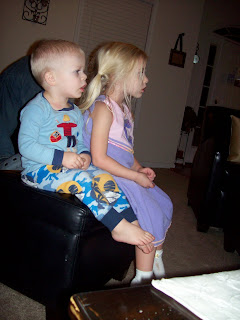 Sitting together and watching t.v. They looked too cute just perched on the ottoman like this. 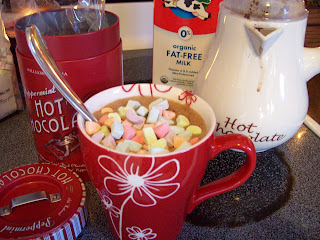 This is the peppermint hot chocolate that I was bragging about on facebook yesterday. 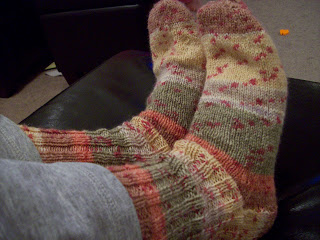 And I am now the proud owner of a pair os socks that I knit myself. Pretty amazing. Still can't believe. I bought some yummy Alpaca at Mosaic and have started another pair.

So this week I DID NOT throw all the clothes that needed to be hung in the closet on the floor. And I DO NOT do this on a regular basis! I ALWAYS hang them up as soon as they come out of the dryer and Mr. C's shirts are always in pristine, wrinkle-free condition.

I also did not leave the muddy dogprints on my carpet in the living room. I did not get crusty and irritated about it and I cleaned it up right away. I had a perfect attitude and did not say ANY curse words in my head as I watched my beloved labs strut across the floor after escaping from the back yard, rolling in some animal dung, and shaking in my house. Yum. Again, I had a really great attitude and with a smile and a spring in my step, I cleaned it up.

I most certainly DID NOT scream "DANG IT" in front of my three year old when the dogs barked and woke up Reece after only an hour and a half nap. I simply smiled and kissed their little furry heads and did not get upset about my freshly made peppermint hot chocolate getting cold on the coffee table.

And finally, I absolutely positively concretely DID NOT forget to brush my teeth one morning taking Avery to school. I have braces and have spent 6 grand on them and would never ever ever forget to fully brush and floss.

ENJOY! Check out MckMiracle on the side of the page to see why I am starting this. I love the opportunity to be honest as moms. Can't wait to see some of you and what you WOULD NEVER DO!

Original NOT ME MONDAY
Posted by Megan at 4:59 PM No comments:

This is a book based on the FIREPROOF movie with Kirk Cameron. It's a 40 day book that you read a page each day to see what you are to focus on with your spouse. Yesterday was patience and today is kindness. Shane and I just talk 5 minutes before bed about what we did that followed it and it is making a big difference even just since we started talking about starting it a week ago. Highly recommend it and SHOUT OUT to Amy (my S.I.L.) for giving it to all the boys for Christmas. It's on sale at CBD.com if you are wondering. In the post below, just click on the word LOVE DARE and it will take you to a link for the book.
Posted by Megan at 1:11 PM 2 comments:

Finally finished my first pair of knitted socks. Took forever, but a lot of distractions in between. After finishing my socks on Sunday I rushed out to Mosaic to get some Alpaca Sox yarn that I have been drooling over for a couple of months. It's a light grey and I am doing a lace pattern on it. I can only work on it when Little Man is asleep though as I have to actually pay attention on this one! I'm also starting something for Mr. C, but he doesn't know about that and hopefully I can keep it hidden until next month.

I've started the Central Park Hoodie, a little ambitious, I might get it finished for fourth of July! It's a yummy red yarn that I've had stashed since April and this will be the perfect project for it. Those cables look daunting, but through the knit a long at my knitting group I can hopefully get it done.

I couldn't find the trash can lid today. Looked all over in the garage for it. Finally had to stick it in the garage because the diapers were stinking up the kitchen, yum! Lo and behold after a little frustration I found it in the dishwasher. My wonderful husband threw it in there to get a thorough sanitizing! Couldn't believe it. While I was at my meeting yesterday (right after my quick trip to the yarn shop and startbucks) Mr. C had taken the kids for a ride in the jeep in the woods behind our house and apparently he did the dishes too! Maybe this LOVE DARE thing is really going to work. During the whole "search for the garbage lid thing" I kept thinking I am to be patient today and not get frustrated. Here I was thinking the lid got left out in the road somewhere and all along Mr. C had put it in the dishwasher.
Well, honey...you rock! I've noticed...it's making a difference...I love you.
Posted by Megan at 3:59 PM 1 comment:

Avery and I at a tea party in Ohio with my family. Only the girls of course. More info and pictures to follow. 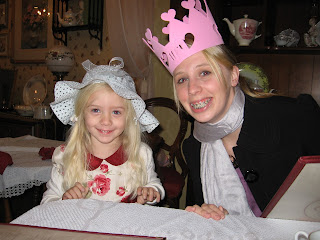 We've had a lot of traveling and with all of the festivities for some reason I just didn't feel like blogging. But alas! I am loading pics and getting ready to get back into the swing of things.
Posted by Megan at 2:05 PM 2 comments: