So I bought this book over a month ago. And kept finding excuses not to read it. And then I decided that I would read it this week. So last week you would have thought that since I was going to start reading a book about excess that I would start cutting back and even purging. Nope the opposite. I'm an idiot. A slow learner. A sinner.

Instead I bought 4 large frames, birthday gifts (for kids who already have way too much), 6 yards of fabric ( I already have a hundred stockpiled in the basement), two large ferns, 3 milk glass vases from an antique store, 4 hyacinths, and numerous other items I have already forgotten about. Ridiculous.

And of course everything was justified. It was on sale. It was cute. Just what I was looking for. It would hide the wet dog and dirty soccer socks smell in my house. On and on. And two days later it hit me. Totally gross. I was gearing up for the next few months of living with less. I was in full panic mode. I'm an addict. Just like every other red blooded American. I love to get new stuff or new to me old stuff. I like my house to be pretty, my kids to look cute, and to be in style. That last one is questionable actually. But you know what I mean. So today I started returning stuff. I came up with $130 of stuff to take back that was not already opened, eaten, or used. Talk about disgusting. All because of the insecurity of knowing I am going to be convicted. Which meant the Holy Spirit was already convicting.

I am on the third month in the book. And I am ready to get out the garbage bags and fill them up.

She talks about how spending every dollar as if you are helping the needy and furthering the kingdom. A literal "love your neighbor". We shall see. Am I changeable? I think that is my biggest fear. I will read this and not want to change. Not want to see how much I am missing out by giving up and blessing someone else.

I will update when the book is done. And what if any changes have occurred. I know that only God's presence can "fill up" the void that Americans attempt to fill up with consumerism. And I include the majority of the American Christians in this category.

Breathing issues scare me. And my poor Reece has asthma. So far we've always been able to prevent an asthma attack. But last night he woke up having one at about 1a.m. I am so incredibly grateful that he got pnemonia last year. I know that sounds horrible. But it was a blessing in disguise. We were able to find out through that experience that he has asthma and were given a breathing treatment machine, named "Froggy" and plenty of medicine to see us through this. So instead of another traumatic ER visit, I was able to cuddle with him in bed, hooked up to Froggy, and give him the albuterol. Within a half hour he was back asleep and breathing so much better. Today he's a little hoarse and despite the beautiful sunny 80 degree day, we are staying inside away from allergens. I am praying he outgrows it, but so thankful for modern medicine!

It's finally here. Weather in the 70's. Flowers poking through the grass. Sun shining bright.  But the best part is being outside. My little brood is so happy. We've been to the park every day. Lots of bike riding, basketball, and running barefoot in the grass. I made a huge container of sun tea out on the deck yesterday. It just tastes so good!

And here is the family's most recent family shot. More to follow soon. 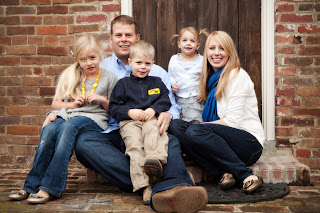