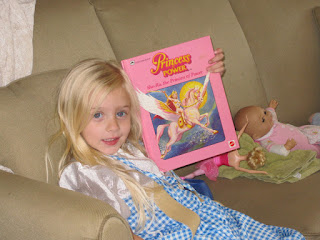 This is just a random picture of Avery reading a She-Ra book from when I was little.
Well, we have embarked on the potty*training adventure with Reece. He has done amazing. The only time he has accidents is when he sits on his bouncey zebra thing...oh, and when he has clothes on! So the last 5 days he's been basically naked (except at church) and we've stayed home. You know how much I love that. But seriously, all kidding aside. He's done great. He picked it up really quickly and thinks he is totally hot stuff. We leave for Disney in a week so I am really hoping that we can put clothes on him by then! HA!
I opted to just teach him to sit on the potty like I taught Avery. I don't know if this will traumatize him in the future, but I figure at only 2 1/2 he'll eventually be tall enough to stand! LOL After vacation he starts preschool (if he can be clothed with no accidents) and then we move him to a twin bed.I dreaded him growing up so much thinking he was going to be the last one, but now that we have #3 on the way, I am finally enjoying him becoming a little more independent.
Oh and for those of you waiting on pins and needles, it is most likely a BOY. Sarah will do another ultrasound on the 11th and it will be enough farther along to be more accurate. Shane and I have been thru the million baby names book and so far have come up with NOTHING for girl or boy. We're in trouble. I like Piper, Clara, and Emma for a girl and Kennan, Judah, or Lachlan for a boy. Shane so far only has funny names and getting him to give a serious response has been somewhat impossible. Do most people have this much trouble? Avery was so easy. Boy or girl it was going to be the same name and we picked it within a couple of weeks of finding out we were pregnant. Reece was a choice between that and Lincoln and we just couldn't decide until 6 weeks before he was born. But then we at least had it narrowed down. It's going to be fun to see what this name ends up being since we are having so much trouble with it.

I really like Liam for a boy too. And Matthew ... Those were my boy names - oh and Tradd.

We had a terrible time deciding on names. Ugh! Tim is like your husband, trying to get them to be serious makes one utterly frustrated! We compromised on Ryan- we both made a top 10 name list and that was the only one on both and I think it was like #10on both! HA! I love the names Tyson and Luke for a boy.