Just found this picture of Avery and I on her birthday as we headed out to the pottery studio and to SweetFrog. Such a fun 7th  birthday with her two best friends. This picture has nothing to do with swim lessons tho, ha! 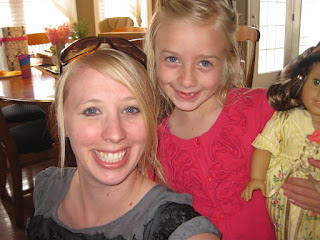 So back to the point of the post. All three kids started swim lessons this week and so far are doing great. I have no pictures because I have to be in the pool with Ellie so I am a little bummed about that. I will have to figure out a way to get some before the two weeks is up! Getting all three kiddos ready in the morning and at the pool by 9 a.m. hasn't been as bad as I thought. And I am loving it because Ellie and I get to be in the therapy pool which is more like a big hot tub than the freezing cold pool the big kids swim in. 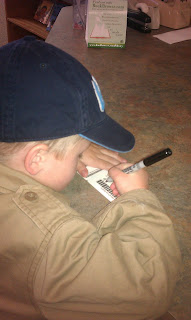 Reece has been asking for a library card which is so incredibly cute. But my rule has always been that they have to write their name first and then they can get on. So right around his birthday in April we took him to the library and he rocked it! Wrote his name in sharpie right in the little box. 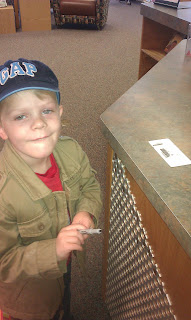 I was so proud of him. And couldn't keep taking more pics to get one of him smiling because I was also chasing Ellie. But he put the card in his wallet and totally thinks he is big time stuff!