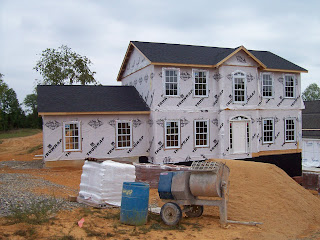 After five months of living in a pretty yucky rental house, we finally bought a house. Shane kept it a secret all last week! I had one of the most depressed weeks of my life. We had narrowed it down to two houses and Shane said we were buying the "stinky" house. I was horrified, upset, sad just to name a few. I spent the whole week praying about supporting my husband, but my heart was really not there. Well, after 4 days of fighting about it, Shane gave me my birthday card early. Inside was a picture of this house with the words, "The papers were signed on Thursday." WHAT!!!!!!!!!!!!!!!!!!!!!!!!!!!!!!!!!! I wanted to hit him and kiss him all at the same time. It was the house I really wanted. After I literally sobbed for about 10 minutes, I thanked him. He had no idea the spiritual roller coaster I had been on for days! Sometimes his sense of humor and desire to suprise goes a little too far! Oh well, I knew darn well what I was getting into when I married him. The only bummer in this story is we don't close on it until the end of Oct. Well, the Lord carried me this far, what's a few more weeks. I told Shane though that once I move into this house, it will be a long time before I consider having a moving truck show up at my door any time soon. For heavens sake, I have lived in five states since 2001!
Posted by Megan at 1:55 PM

That is soooo awesome! I can't wait to see the progress and changes it makes! Does it have a sewing room?!

What a GREAT house! It will be sooo worth it when you finally get in! He's a prankster - why do men think that's sooo funny! What a great birthday surprise though!